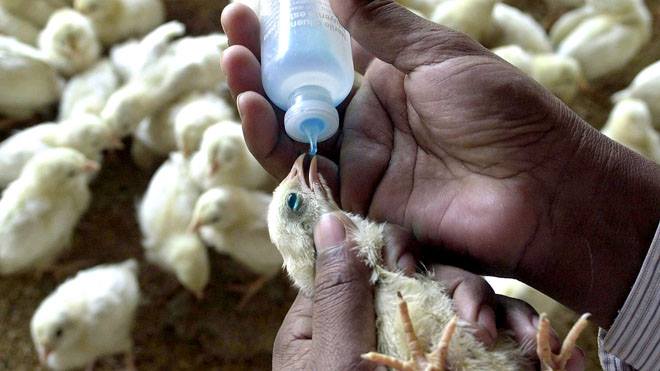 On poultry farms, biosecurity practices and farm hygiene are used to reduce the risk of disease agents spreading from outside sources (such as wild bird populations or other farms), disease agent movement between sheds on the same farm, disease agent carryover from one batch to the next in the shed environment, and disease agent transmission from breeding flocks to their progeny via the egg. To keep infections out of broiler farms, farmers adopt a variety of safeguards.

The growing popularity of backyard poultry rearing as a pastime or a way of poverty alleviation in less developed nations has recently piqued interest. In nations like South Africa and the Pacific Islands, village and backyard chicken raising has become a need for everyday existence. As a result, biosecurity is critical in defending important economic investments and community development as well as protecting flocks from dangerous infections.

Due to the variable immunological capacities of different breeds and ages, it is critical that birds of different species or ages are never mingled if live birds (chicks) are purchased, depending on the conditions. What one bird/breed may be immune to, another may find fatal. Cleanliness and hygiene in the home are critical in preventing illness transmission. Litter must be maintained clean and dry at all times; damp or unclean litter can aid pathogen development, leading to ailments like “breast blisters and footpad dermatitis.”

The backyard/village producer can detect whether a disease agent has infiltrated the flock by following rigorous routine and biosecurity precautions, such as keeping simple record sheets (eggs laid, mortality, feed eaten). Because biosecurity is the most cost-effective disease control method available, the producer should be able to efficiently avoid any preventable disease outbreaks by following these three basic rules: “Isolation, Traffic Control, and Sanitation.”

It’s also crucial not to share tools or equipment with neighbors or receive birds from them. By adequately segregating birds in an enclosure, the risk of pathogen-carrying animals coming into touch with them or these animals gaining entry to the flock is greatly minimized. Despite the fact that wild birds pose a direct threat to biosecurity, it is critical to keep family pets away from the flock. After coming into close touch with other animals or family pets, the producer must remember to sanitize their hands, clothing, and shoes. The importance of sanitation in disease control cannot be overstated.

Choosing an appropriate sanitation product to prevent sickness relies on the circumstances of the producer (such as cost, transport & degree of operation). Sanitation (disinfectant) goods are classified as follows:

When selecting a sanitation product, it’s crucial to think about the sort of surface it’ll be used on. Hypochlorites and Iodophors are more suited to disinfect processing areas such as benches, walls, and foot-baths, whereas Phenol is an excellent agent in limiting disease growth in organic settings, or “dirty environments.” It is suggested that the producer obtain expert guidance on the appropriate sanitizer for their production needs.

To ensure the effectiveness of backyard and village poultry bio-security, a robust pest management program is required. Baiting is as vital to bio-security as sanitization because rodents, particularly rats and mice, are drawn to chicken feed and have the capacity to access even the most well-fenced-off regions.

Early diagnosis and accurate identification of infectious illness outbreaks are critical in adopting damage minimization measures. Despite the fact that bio-security measures appear to be working properly, the danger of disease breakout remains high. If the flock exhibits any of the following signs, IMMEDIATE action to further prevent the illness from spreading must be done (including quarantining obviously sick birds and notifying a veterinarian or poultry expert):

Growers take a number of precautions to reduce the hazards that people provide in terms of spreading poultry illnesses into chicken farms, notably through their footwear, clothes, hands, and even cars.

Because wild birds can bring illnesses to the farm, a variety of precautions are made to prevent wild birds (or their droppings) from getting into touch with the chicken flock. These are some of the measures:

Farmers have a documented pest management policy in place to decrease the danger of rodents bringing illnesses into the property. The farmer keeps meticulous records of the hens’ health, size, and behavior so that any emergent illness concern may be quickly discovered and addressed.

Poultry farmers must use disease prevention as a primary approach. Rather than relying on therapy, it is far better for the birds and the commercial poultry operator to prevent the disease from happening. “Bacteria, viruses, protozoa, fungus, parasites, and any other organisms capable of bringing an infectious illness into a chicken flock,” according to appropriate bio-security measures.

Healthy, stress-free birds have an active metabolism and a strong immune system that keeps them healthy and disease-free. Birds’ natural protection systems will operate best if they are fed nutritionally balanced food, have a pleasant living habitat, and are not afraid or anxious.

The capacity of different genetic lines of chicken to withstand or recover from illnesses may differ. The use of genetic lines that are resistant to disease issues that are known to exist in a certain chicken farm can significantly reduce illness and other disease preventive expenditures.

Vaccines help to prevent disease by activating the immune system of the bird in such a manner that the immune response is enhanced when the bird is later exposed to a pathogen (or disease-causing organism). Vaccines have traditionally comprised either a tiny live dosage of a weak version of the pathogen or a larger dose of a dead preparation of the disease-causing organism. The weak versions of pathogens used in live vaccinations can either be found naturally or created in the lab. Attenuated vaccinations are those that have been created. Because the live organism may colonize and persist in the host for a longer period of time, it stimulates a longer and more efficient immune response than dead vaccinations. New technologies are paving the way for more effective vaccine development. More efficient approaches for discovering the mechanisms by which organisms cause disease and activate an immune response in the host, as well as highly targeted and effective attenuation processes, are among them.