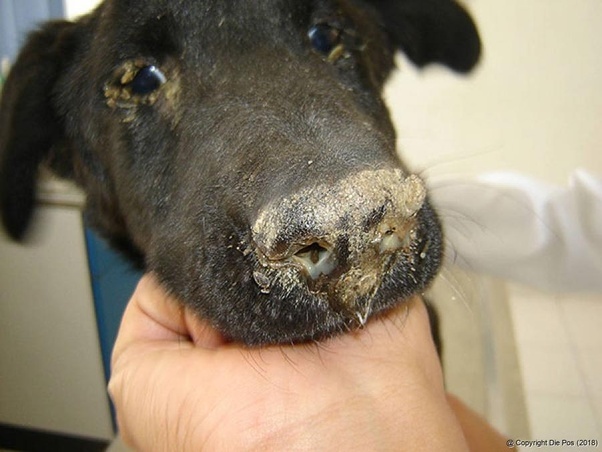 Clinically, canine distemper is characterized by:

Canine distemper virus (CDV) is a paramyxovirus that is closely linked to measles and rinderpest viruses. Most disinfectants, including phenols and quaternary ammonium compounds, are toxic to the single-strand RNA virus because it is fragile and encased. Outside of the host, it is relatively insecure. Infected animals’ aerosol droplet discharges are the main route of infection. Virus can be excreted by sick dogs for several months.

The virus begins to reproduce in the respiratory tract’s lymphatic tissue. Infection of all lymphatic tissues follows infection of the respiratory, GI, and urogenital epithelium, as well as the CNS and optic neurons, in a cell-associated viremia. In these tissues, disease follows viral replication. The level of specific humoral immunity in the host throughout the viremic phase influences the degree of viremia and the extent of viral dissemination to diverse tissues.

A transitory fever occurs 3–6 days after infection, and leukopenia (particularly lymphopenia) may be present; these symptoms may go unrecognized or be accompanied by anorexia. The fever goes away for a few days before returning with a second fever, which may be accompanied by a runny nose, mucopurulent ocular discharge, lethargy, and anorexia. GI and respiratory symptoms may develop, often worsened by secondary bacterial infections; pustular dermatitis may also develop. Encephalomyelitis can arise in conjunction with these symptoms, as a result of the systemic disease, or in the absence of systemic symptoms. Hyperkeratosis of the footpads and epithelium of the nasal planum, as well as enamel hypoplasia in incompletely erupted teeth, may be seen in dogs who survive the acute phase.

Overall, the presence of neurologic indications is linked to a longer course of illness; however, there is no method to predict whether an infected dog would develop neurologic symptoms.

The following are examples of classic neurologic symptoms:

The following are some more neurologic symptoms to be aware of:

Classic neurologic indications include localized involuntary twitching of a muscle or group of muscles (myoclonus, chorea, flexor spasm, hyperkinesia) and convulsions characterized by salivation and, frequently, chewing movements of the jaw (“chewing-gum fits”). Emerging virus strains have been linked to increased neurotropism, as well as increased morbidity and mortality from neurologic consequences.

During the disease, a dog may show any or all of these multisystemic indications. Infections can be light and unnoticeable, or they can progress to serious diseases with the majority of the symptoms listed. The systemic disease may last as little as ten days, but due to continuous progressive demyelination in the CNS, the onset of neurologic symptoms may be delayed for weeks or months.

During the disease, a dog may show any or all of these multisystemic symptoms. Infections can be small and undetectable, or they can progress to serious diseases with the majority of the symptoms listed. The systemic condition can last as little as ten days, but due to continuous progressive demyelination in the CNS, the emergence of neurologic symptoms can take weeks or months. The disease is caused by an inflammatory reaction associated with persistent canine distemper virus infection in the CNS, but mechanisms that trigger this syndrome are unknown.

Infected young dogs with thymic atrophy have a consistent postmortem result. In dogs with neurologic symptoms, hyperkeratosis of the snout and footpads is common. Bronchopneumonia, enteritis, and cutaneous pustules may also be present, depending on the severity of the secondary bacterial infection. Only respiratory anomalies may be discovered in cases of acute to peracute death. In the respiratory, urinary, and gastrointestinal epithelium, canine distemper virus causes necrosis of lymphatic tissues, interstitial pneumonia, and cytoplasmic and intranuclear inclusion bodies.

Lesions found in the brains of dogs with neurologic complications include:

In dogs with multisystemic symptoms, canine distemper should be considered when diagnosing any febrile disease. Symptoms do not always show until late in the disease, and the clinical picture might be altered by parasitism and several viral or bacterial infections.

Other systemic illnesses in dogs can be confused with distemper:

Intoxicants like lead or organophosphates can cause GI and neurological symptoms at the same time. A clinical diagnosis of canine distemper is based on a febrile catarrhal disease with neurologic consequences.

Immunofluorescent assays or reverse transcriptase (RT) PCR can be used to assess the following in dogs with multisystemic signs:

Natural infection and the vaccinal virus may usually be distinguished using commercially available quantitative RT-PCR. A two-step RT-PCR test has also been established to identify vaccinal strains from emergent wild-type strains; this assay would be particularly useful in epidemiologic investigations or epidemics in non-canine species. CSF can be tested for antibody titers or ELISA and compared to peripheral blood; a higher level in the CSF is typical of spontaneous infection versus immunization. Biopsies from the footpads or the hairy skin of the dorsal neck can be used for viral antigen immunofluorescent assay (IFA) or fluorescent in situ hybridization for viral DNA.

Histologic lesions, IFA, or both are frequently used to confirm the diagnosis during necropsy. When the dog has only neurologic signs or circulating antibodies (or both), these samples are frequently negative, necessitating the use of CSF examination or RT-PCR, as stated above.

There is no single treatment that is particular or consistently effective. Antiviral drugs have shown promise in vitro studies, although they have not yet been widely employed.

Unfortunately, treatment for acute distemper neurologic symptoms is generally ineffective. If the neurologic indications become more acute or progressive, the owner should be informed. Dogs may recover entirely from multi-systemic symptoms with timely, active care, but in some cases, neurologic signs may persist after GI and respiratory signs have disappeared. Immunosuppressive therapy with anti-inflammatory or higher glucocorticoid doses may help certain dogs with chronic progressive or vaccine-induced neurologic illness.

The large host range of canine distemper virus and the potential for growing pathogenicity of new strains necessitate mass immunization of domestic dogs. The absence of maternal antibodies interferes with the successful immunization of puppies with canine distemper modified-live virus (MLV) vaccines. Puppies are vaccinated with MLV vaccine when they are 6 weeks old, and then at 3- to 4-week intervals until they are 16 weeks old, to overcome this barrier. In the context of substantially higher levels of maternal distemper antibodies, the measles virus vaccine promotes protection against the canine distemper virus. When puppies are 6–7 weeks old, they are given an IM dose of MLV measles vaccination, followed by at least two doses of MLV distemper vaccine when they are 12–16 weeks old.

There are several different types of attenuated distemper vaccines available, and they should all be used according to the manufacturer’s instructions. MLV vaccinations should not be given to pregnant or lactating females. In immunocompromised dogs, MLV vaccinations can cause postvaccinal disease. The American Association of Zoo Veterinarians advocates extra-label use of a recombinant canarypox vector vaccine producing distemper virus proteins in numerous at-risk animals maintained in zoos and parks.

Because of the lapses in protection that can occur in stressed, sick, or immunosuppressed dogs, and because vaccines are labeled for annual use, annual revaccination has long been the usual. The conclusion that immunity generated by MLV distemper vaccines lasts 3 years is supported by substantial evidence. However, in the vast majority of cases, this is an off-label use of the vaccine; hence, decisions to revaccinate less frequently than once a year should be based on local disease prevalence and other relevant risk factors, as well as industry and professional organization guidelines.